For Such is the Kingdom 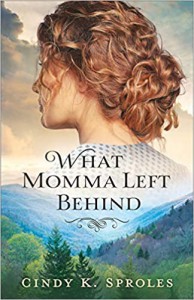 “I’d missed my chance to be a wife and a mother so I could help her. That was water under the bridge, as Momma would say. But I was no quitter. Never had been. At seventeen, I’d manage just fine.”

Appalachia has always spoken to my heart and soul. I live in northern Appalachia, although when I think of the region my mind conjures up visions of the mountains, influenced by two of my favorite books growing up: “When I Was Young in the Mountains” by Cynthia Rylant and of course Catherine Marshall’s “Christy.” There is something about the simplicity and starkness of life in these mountains that reverberates down through the ages and lives on in the spirit of the people today.

From the first time I saw the cover of Cindy Sproles’ “What Momma Left Behind”, I knew that I wanted to read it. I did not look at the synopsis, and as usual I’m glad that I refrained because this book turned out to be very different from what I was expecting. I love it when that happens because it really enlivens and enhances the reading experience. The characters surprised me, beginning with Worie, whom I expected to be a softer character because of her devotion to the orphaned children. However, I love her fiery attitude and strength, both of which reflect the way of life in the Appalachians in 1877. Sproles employs a bit of a reversal in character development with Worie, using not only the children themselves but especially a community pastor and a former slave to soften her approach to people.

For a relatively short novel, it has an uncompromising impact and is one that I expect to remember for a long time to come. The author delves into the secrets of Worie’s family to explore the theme of journeying to forgiveness and how coming together to help one another is essential for surviving their hardscrabble existence. While physical isolation plays a role, I think that the distance between hearts hardened toward each other, harboring resentment, is the most daunting obstacle. Because of all that Worie has gone through, it is not difficult to understand her feelings, and I admire her tenacity and sense of humor: “I’d heard folks talk about lightnin striking twice in one place. I reckon it had done struck me twice and then some.” She also remarks, as understanding begins to dawn, “I thought trust was something you could find, but I’m seein it ain’t found—it’s gived.” What I find to be the most poignant moments in the story are those which reveal how the Lord speaks to Worie in her hardened unbelief to show her how to be the woman she was created to be. Nobody is perfect, but we can still accomplish the work to which God calls us if we look to the Bible and seek to live for Him in both the good days and the hard ones.