In Black and White Author Interview and GIVEAWAY! 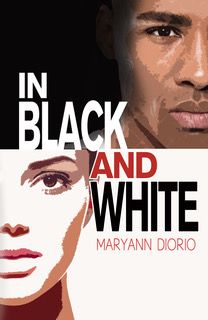 A white woman. A black man. And their forbidden love.

Can endurance and faith sustain the love between a white woman and a black man, threatened by rejection, guilt, and racial injustice? Can love alone reconcile their starkly different worlds, lighting the way to a bright future together?

When graduate student, Tori Pendola, a white American woman, and Ghanaian exchange student, Jebuni Kalitsi, heir to his tribe’s chieftaincy, fall deeply in love, they must face not only their own inner demons of rejection and guilt, but also the demons of societal hatred bent on destroying their relationship. Will their love survive the cruel and bitter attacks against them, or will hatred and prejudice gain the upper hand?

In Black and White is a deeply moving story of the power of God’s love to restore all that is broken in our lives.

Dr. MaryAnn Diorio is an award-winning author of compelling, page-turning fiction that deals with the deepest issues of the human heart. She is the author of the popular trilogy titled THE ITALIAN CHRONICLES, set in 19th-century Sicily. MaryAnn holds the PhD in French with a concentration in Comparative Literature. She is also a Certified Life Coach and a Licensed Minister. MaryAnn and her husband Dom, a retired ER physician, recently celebrated their 50th wedding anniversary. They are the blessed parents of two wonderful adult daughters, a very smart son-in-law, and six rambunctious grandchildren. When not writing, MaryAnn enjoys painting, playing the piano, and making up silly songs with her grandchildren. You can learn more about MaryAnn and her writing at https://www.maryanndiorio.com

Greetings, awesome readers and friends!  It’s great to have you with me on this tour. I trust you’ll be blessed and have lots of fun.
We writers are a strange breed.  While we know what we are writing, we often don’t fully understand what we have written. Does that make sense? If not, let me explain.
Before I started writing In Black and White, I prayed. And I prayed hard. The idea for my story came to me back in the 1990s. Yes. You read that right! But it first came to me as a seed that the Lord planted in my heart. The seed would need time to grow, sprout, and blossom. So, back in the 90s, the Lord told me it wasn’t time to write my story yet.
So, I watered and waited as the seed began to do its thing. At the beginning of 2018, the Lord said, “It’s time.” And I instantly knew what He meant. It was time to start writing In Black and White.
So, in January of 2018, I started writing In Black and White. For almost two years, I wrote. The story took many twists and turns and was finally completed in August of 2019.
I mentioned earlier that we writers don’t often fully understand what we have written. What do I mean? I mean that often, for me, it is after I write the story that I recognize the theme of the story.
It’s like this: A seed doesn’t really understand what its Maker is doing. It just follows the plan. When I write, I don’t fully understand what Holy Spirit is doing. I just follow His lead.
Amazingly, the theme that I recognized in my latest novel is the same theme that appears in virtually all of my fiction. What is that theme? It’s forgiveness.
It seems as though the message of forgiveness is the spiritual trademark of my fiction. Why? Perhaps because I’ve had to do a lot of forgiving during my life—and a lot of asking for forgiveness.
Forgiveness is the reason Jesus came to earth. He died to forgive us. If we want to be like Him, we, too, need to forgive.
So, as you read my story, I pray that it will stir you to forgive anyone and everyone in your life who has hurt you in any way. And, if need be, I pray that my story will encourage you to ask forgiveness of those whom you have hurt.
Our heavenly Father is the Great Forgiver, May we become like Him by making forgiveness the theme of our lives.
With love and blessings,MaryAnn Diorio
Recipe for Italian Spaghetti and Meatballs from MaryAnn Diorio’s novel, In Black and White. This is my late Italian mother’s recipe, straight from Italy.
Enza’s Authentic Spaghetti and Meatballs Recipe
MEATBALLS

NOTE: Any drippings left in pan may be used as basis for homemade pasta sauce (“ragù” or “gravy”). If so desired, cool drippings, place in freezer-proof container, label contents of container, and freeze.
SPAGHETTI

I never wanted to be a writer. I simply never considered it. Up to that point, I had studied and prepared for a career teaching foreign languages at the university level. Prior to that, I had not considered writing as a profession except for a fleeting thought about studying journalism when I was 15. But the instant I walked into my first French class, my heart was smitten with the language, and I went on to earn the PhD in French.

But at age 30, I began to have an unusual desire to write.  As the desire intensified, I asked the Lord if this desire was from Him. Through a series of miraculous situations, He confirmed that it was. So, totally clueless, I stepped out in faith and began to write for newspapers and magazines. I did this for several years and then, in 1989, published my first non-fiction book, You Were Made for Greatness. It is a book about the Christian's true identity in Christ and the authority and power we have through Him and in Him.

What would you say is your interesting writing quirk?

I have an innate tendency to write by the Rule of Three, often placing the third element of a construction on a separate line for emphasis.

For example, here is an excerpt from Chapter 15 of In Black and White where I use three adjectives in a row and place the third one on a separate line:

What would he find when he got there? Would the trip turn out to be futile? Confrontational?

What is your work schedule like when you’re writing?

I am very disciplined in my work schedule. I treat my writing as a job and report to my office at 9:00am five days a week. If I am on deadline, I write on Saturdays as well. I write faithfully from 9:00am until 2:00pm, sometimes until 3:00pm.  Afterwards, I spend an hour or two on marketing, answering emails, and posting on social media. I never write on Sundays.

I am able to follow this schedule now because my children are grown. When they were small, I wrote in tiny snippets of time. For example, I would write in my car while waiting for a red traffic light to turn green. The person behind me always let me know when that happened.

Is there a particular literary period that you’re drawn to (Regency, Victorian, Romantic, Modernism, etc.)?  Why?

Who was/is your biggest inspiration?

People are my biggest inspiration. I love to observe people, to study them, to see what makes them tick. There is a joke among novelists that it is okay to listen in on the conversations of strangers. For the novelist, this is not eavesdropping; it is researching.

By The Book, March 7 (Author Interview)

For the Love of Literature, March 10 (Author Interview)

For Him and My Family, March 11

All 4 and About Books, March 13 (Author Interview)

To celebrate her tour, MaryAnn is giving away the grand prize of a $25 Amazon gift card!!
Be sure to comment on the blog stops for nine extra entries into the giveaway! Click the link below to enter.
https://promosimple.com/ps/f63e/in-black-and-white-celebration-tour-giveaway
contemporary romance Contemporary giveaway new adult relationships