Growing with Grace Through Faith: A Book Review of "Grace The Early Years" 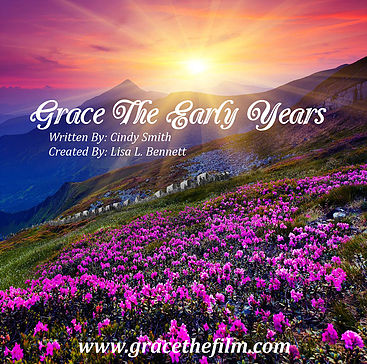 Proceeds help missions in the coal mining town of War, WV and to fund the Grace film series.

About the Grace Project "Grace" originated from a story told to Lisa by her beloved grandmother, a missionary, and part of the film's proceeds will be used to help in the town of War, West Virginia, where Lisa's parents are missionaries. War is a coal mining town of approximately 900 people. It's located in McDowell County which has the highest suicide rate in the country from drug overdoses. When the coal mines began shutting down, the lack of jobs took a toll on families . Our goal is to help through furthering education so many can learn a new skill set, if desired, so they don't have to depend on the coal industry or government to provide for their families.

With Grace being a film series, we have plans to shoot more than one Grace film. It's an opportunity for us to produce content to provide hope, encouragement and inspiration to touch people's hearts which is very important, especially in this current time. 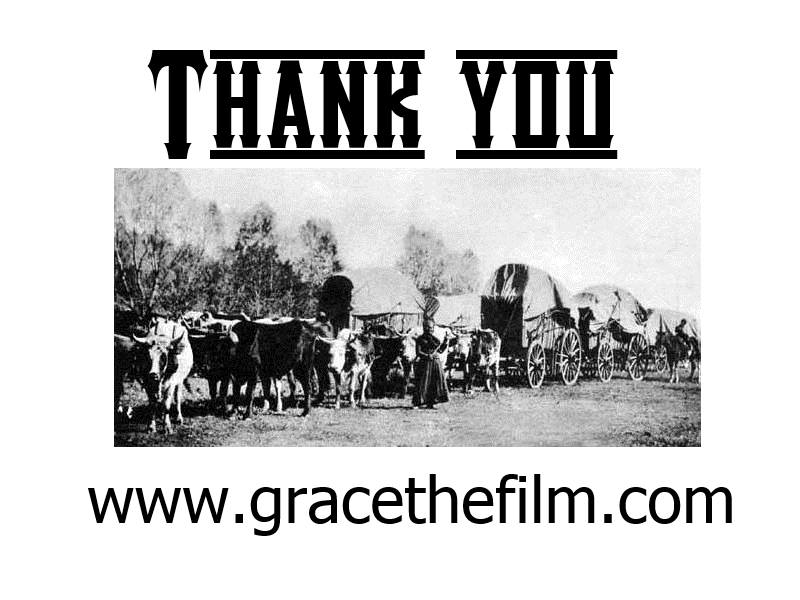 How can you help the Grace Project with the rest of the funding needed to proceed with filming and production? You can donate money via PAYPAL or send your donation to:

As a lifelong historical fiction aficionada with a particular affinity for the nineteenth century, the film series “Grace” captured my attention the moment I first came across it. There is a quaintness about America’s earlier years that resonates through the centuries, drawing us back to an era of faith and grit, when God and family meant everything. Such a world seems, in many ways, utterly foreign in today’s society, with values that challenge the mainstream. And that is why productions like “Grace” are so important. In a self-glorifying culture, undertakings such as the Grace Project instill values of loving and helping others and serving where there is a need, all in a family-friendly environment.

An introduction to the story of Grace and her missionary journey, Grace The Early Years is a 50-minute audio book CD. Comprised of five chapters, each of which is uniquely narrated, this audio book chronicles Grace’s birth and adolescence through a series of heartwarming vignettes. These sketches each feature a different celebrity narrator, hearkening back to the oral tradition as Nancy Stafford, Kathy Garver, Tony Senzamici, Tanya Christiansen, and Jim Damron relate segments of Grace’s early life. Enhancing the authentic ambiance is Cowboy Guide narrator James Woody. The various voice inflections and poetic descriptive language infuse the narrative with joie de vivre and call to mind a gathering of townsfolk recounting the tale of a well-loved young lady. 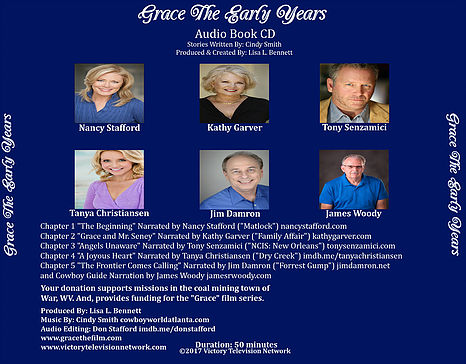 Throughout the story, the themes of family and faith are predominant. One of the most compelling elements is the interweaving of Scripture and daily life. Many Bible verses are quoted, with practical applications by the characters that underscore their message. Although the last chapter has a time leap that is somewhat disconcerting at first, it ties together the previous events, demonstrating how each aspect of Grace’s life has led up to this climax and setting the scene for the film.

True to its mission, the Grace Project seeks to inspire and encourage with its message of hope, faith, and love. Part of the film’s proceeds will be used to help those in the coal mining town of War, West Virginia to overcome the difficulties and challenges of losing their livelihoods when the coal mines closed. Funding is still needed in order to continue with production of the film, and donations are tax-deductible. Proceeds from items sold through the website’s store, where along with other items you can purchase this audio book CD as well as the book Journey to Grace, provide funding for the film series and also support missions in War, West Virginia. For more information and to donate and check out the store, please visit http://gracethefilm.com/.