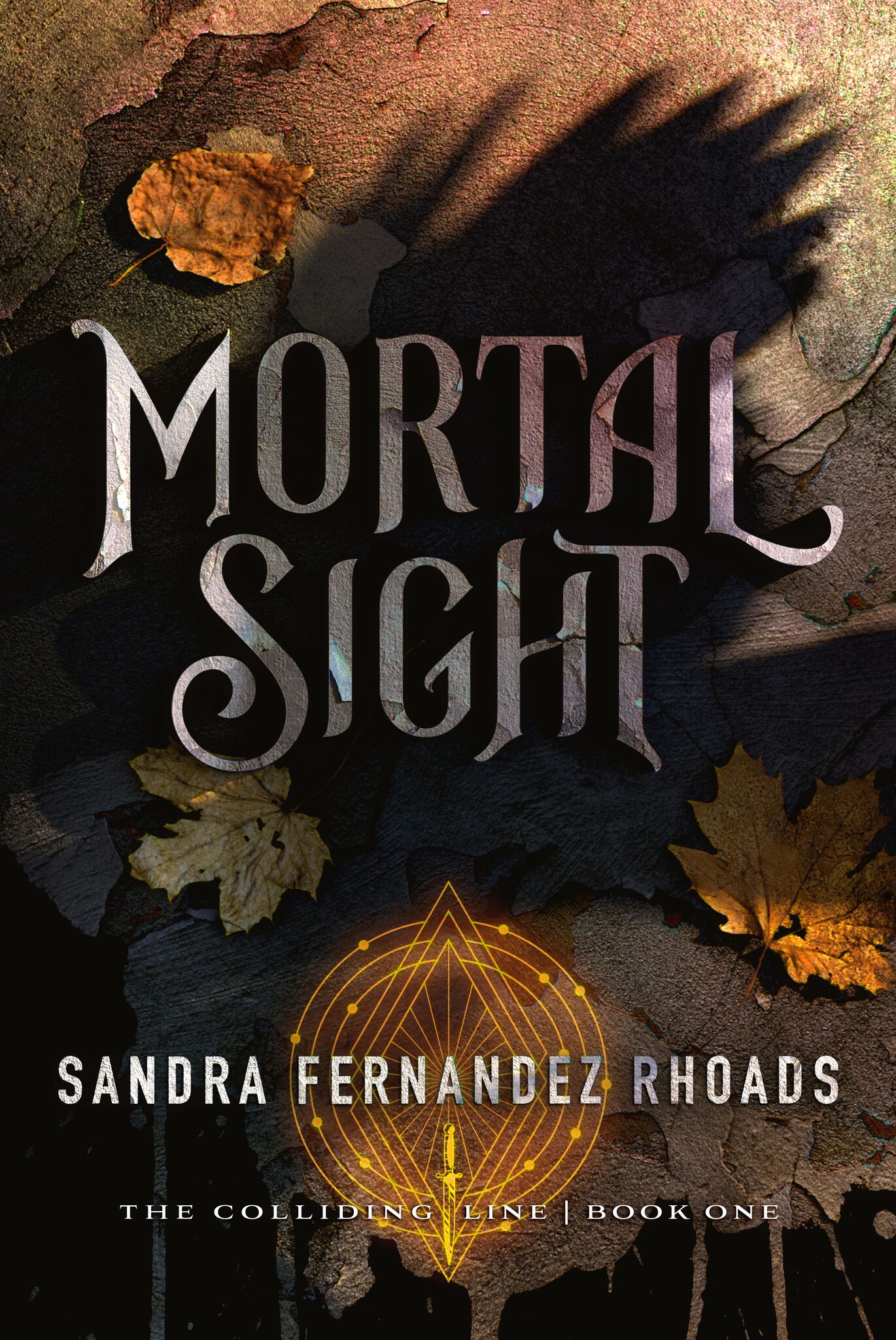 Seventeen-year-old Cera Marlowe wants a normal life; one where she and her mom can stop skipping town every time a disturbing vision strikes. But when a girl she knows is murdered by a monster she can’t explain, Cera’s world turns upside down.
Suddenly thrown into an ancient supernatural battle, Cera discovers she’s not alone in her gifting and vows to use her visions to save lives. But why does John Milton’s poem Paradise Lost keep interrupting her thoughts?


In a race against time and a war against unearthly creatures, will decoding messages embedded in the works of classic literature be enough to stop the bloodshed and protect those she loves? 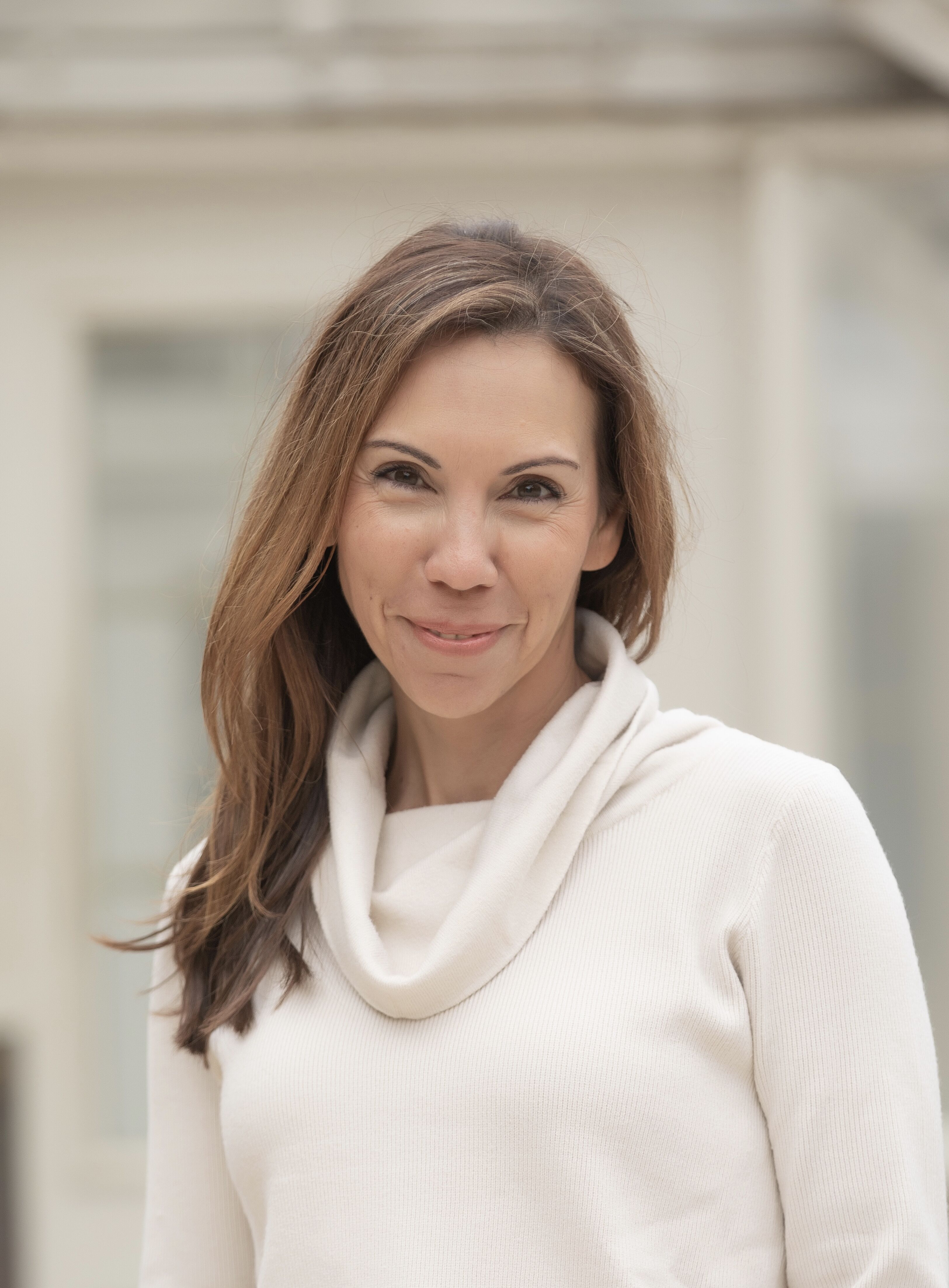 Sandra Fernandez Rhoads is a Cuban-Colombian born in Queens, New York but currently lives in Dallas, Texas. Her previous experience includes earning a M.A. in her 17th century crush, John Milton, writing scripts and performance pieces, directing theater, acting, and running an employment consulting and marketing company. As an AFA-NIET National Finalist in Public Speaking, she welcomes an audience and dreams of playing the theme to Jurassic Park on her cello, named Lysander. Mortal Sight is her debut novel.

I am so excited to share this story. The original story seed for Mortal Sight came from the premise: what if someone never felt like they belonged in this world because they really didn’t? They were born for a place they didn’t know existed, an unseen realm. And if so, what things in our everyday world would shout out this truth, point to this other world, and try to get their attention to let them know that the restlessness is intentional and they were called to something bigger than themselves. The use of art and literature throughout the story comes from my own love for art and the artist community. The unique way artists look at the world could point to this other realm. I chose Milton’s Paradise Lost, in particular because the poem speaks of things invisible and unseen wars. I have a deep love for artists and the creative community and love encouraging others to tell stories through art, whether it’s visual, music, poetry, dance, writing, etc. It’s in art’s narrative that we see broken pieces of ourselves. This story came from the idea that art could create common ground, kickstart community, and maybe even change the way we see ourselves, others or even the world.

“Hesperian is the closest to family I’ve ever felt. I want to do whatever it takes to keep them safe. No matter the cost.”

Sandra Fernandez Rhoads’ “Mortal Sight” is a fantastic example of why as readers we should step out of our comfort zones once in a while and try something new. Fantasy is not one of my preferred genres, generally speaking, although I will say that this year it is starting to grow on me a bit after reading several incredible books, and when I realized that this particular story is urban fantasy, I confess that I groaned. I am all country; the city holds no appeal for me whatsoever, and now I was faced with a tale that was not only metropolitan but also fantasy? As far as I can recall, this is the first work of urban fantasy that I’ve ever read, and to my surprise, I not only enjoyed it, I loved it!

Had I not known that this was a debut novel, I never would have guessed. Rhoads captures the emotional angst of teenagerhood and builds a fascinating and unique world, a second realm where evil creatures roam. “Mortal Sight” is narrated by main character Cera Marlowe, about to turn 17 at the book’s opening, whose mother keeps her away from people and moves them annually. When Cera runs into Maddox one fateful day, the truth about who and what she is changes her life forever, demonstrating that we all have gifts and talents, whether we realize it or not. Each person has their own skills, and as this novel teaches, we need to use the gifts we’ve been given and not be jealous of or covet what others have.

While not overtly Christian, “Mortal Sight” is a clean young-adult novel that is also fitting for older readers as well. John Milton’s “Paradise Lost” figures prominently in this story, forming a foundation for Rhoads to build upon in her own twenty-first century way. There is a very clear connection to spiritual warfare and what we see and what we do not. I was engrossed from the very first page and did not want to put this book down! I recommend it to those looking for a clean book that will keep you captivated from the very first page.

Blogging With Carol, May 2

Book Reviews From an Avid Reader, May 3

For the Love of Literature, May 4

Inklings and notions, May 6

For Him and My Family, May 7

Pause for Tales, May 8

Through the Fire Blogs, May 9

Truth and Grace Homeschool Academy, May 10 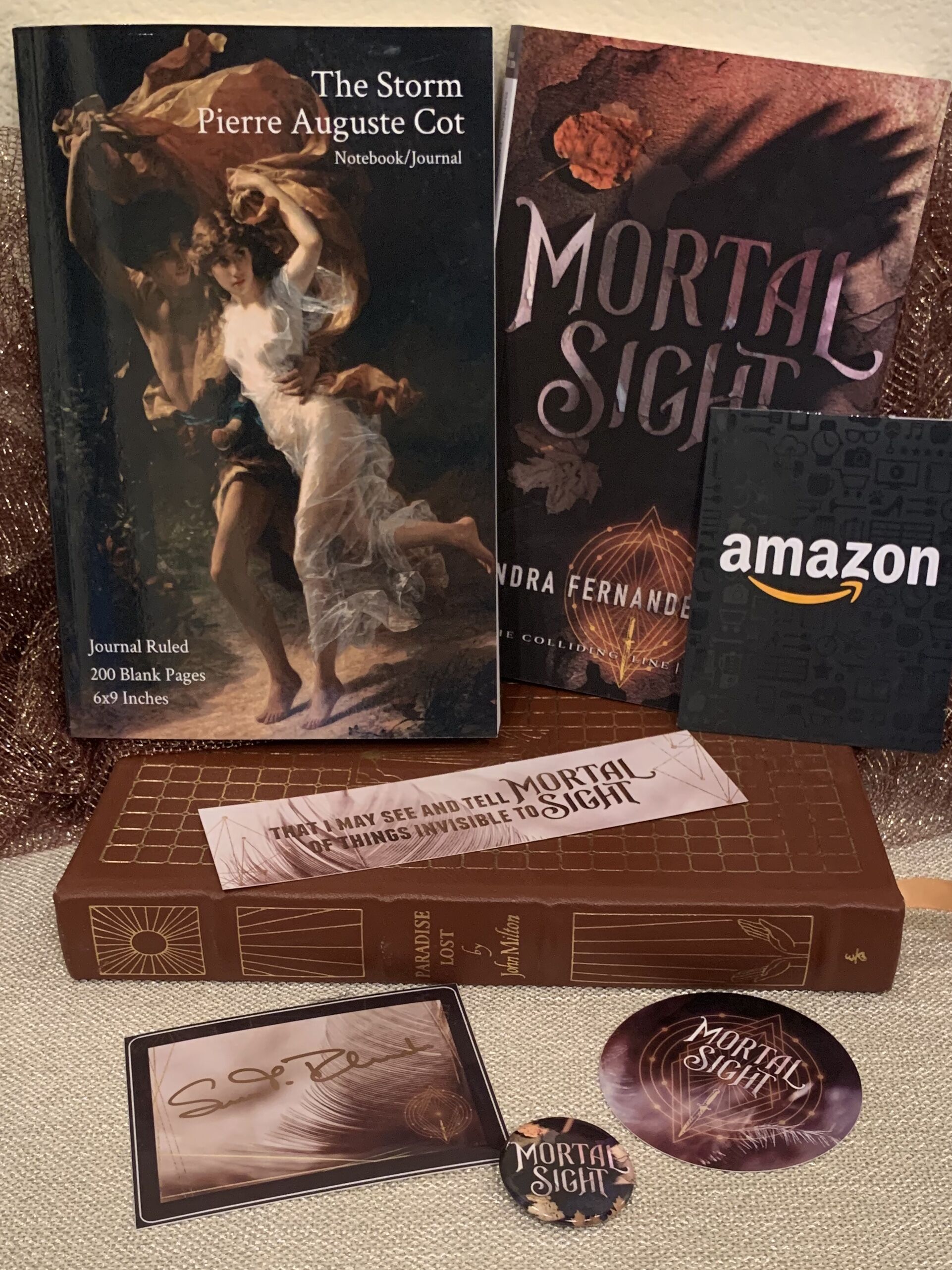 To celebrate her tour, Sandra is giving away the grand prize package of Mortal Sight hardback with exclusive signed bookplate, plus bookmark/Sticker/Button, $30 Amazon gift card, hardback copy of Paradise Lost, and writing Journal of Pierre Auguste Cot’s The Storm!!
Be sure to comment on the blog stops for nine extra entries into the giveaway! Click the link below to enter.
https://promosimple.com/ps/f8fa/mortal-sight-celebration-tour-giveaway
fiction young adult Christian Art urban fantasy teen giveaway Christian Fiction