The Runaway Bride by Jody Hedlund 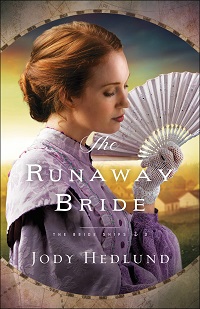 Wealthy Arabella Lawrence flees to British Columbia on a bride ship still wearing the scars of past mistakes. One of the few single women in the boomtown, she immediately has suitors, but she is determined not to find herself trapped again by a poor choice.

Vying for her hand are two very different men. Lieutenant Richard Drummond is a gentleman in the Navy and is held in high esteem. Peter Kelly is the town's baker and has worked hard to build a thriving business. He and Drummond not only compete for Arabella's affections, but clash over their views of how the natives should be treated in the midst of a smallpox outbreak.

As Arabella begins to overcome her fears, she discovers someone in dire need--a starving girl abandoned by her tribe. Intent on helping the girl, Arabella leans on Peter's advice and guidance. Will she have the wisdom to make the right decision or will seeking what's right cost both her and Peter everything?

Jody Hedlund is the best-selling author of over twenty historicals for both adults and teens and is the winner of numerous awards including the Christy, Carol, and Christian Book Award.

Jody lives in central Michigan with her husband, five busy children, and five spoiled cats. Although Jody prefers to experience daring and dangerous adventures through her characters rather than in real life, she’s learned that a calm existence is simply not meant to be (at least in this phase of her life!).

When she’s not penning another of her page-turning stories, she loves to spend her time reading, especially when it also involves consuming coffee and chocolate.

“Her heart swelled with the ache of wishing for something better, for a world where no one had to be undesirable. Could she, in her small way, be a part of making that happen?”

Book two in the Bride Ships series, “The Runaway Bride” manages to be even more compelling and breathtaking than its predecessor, “A Reluctant Bride.” Author Jody Hedlund has a gift for writing captivating historical romances that not only satisfy the heart and the soul, but also shed light on unique occurrences and issues that continue to remain relevant today. Whereas book one concentrated on Mercy Wilkins, a young woman from London’s slums, this sequel focuses on an upper-class gentlewoman named Arabella Lawrence, demonstrating that social class is not necessarily equivalent to contentment and morality. 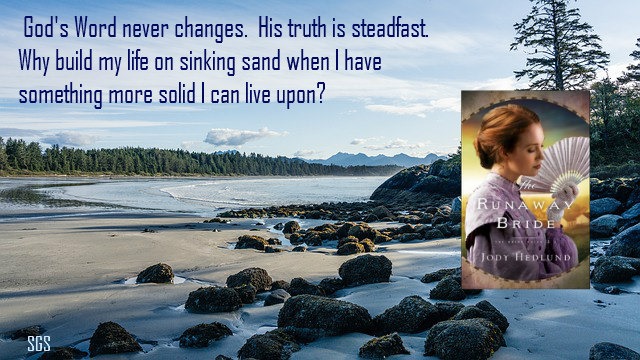 One of my favorite parts of reading a series is the Russian nesting doll effect; each subsequent book pulls a minor character from the book before it and brings them to the forefront to tell their story. In this way, each novel can stand alone, but reading them chronologically offers a chance to grow alongside the characters while experiencing their world through their eyes. Arabella was introduced in the first book as a quiet and timid woman, and the reason for her behavior forms the foundation of “The Runaway Bride.” 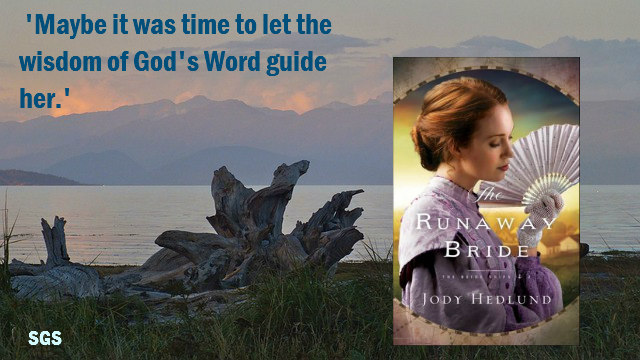 Arriving in Victoria, British Columbia on the first bride ship, Arabella brings with her the torment and fear that sent her fleeing from England. Two men, one a respected Navy Lieutenant and the other a common baker, seek her affection, but is her heart ready to trust again? Her backstory is skillfully revealed piece by piece via flashbacks throughout the narrative, adding suspense while explaining Arabella’s thought process. Entrenched in the prejudices and models of behavior that define the social classes, the city of Victoria provides an often stark glimpse into the treatment of the rich and the poor, the upper and lower class, as well as the treatment of local natives. It is both fascinating and tragic to learn about the misconceptions many harbored, and this read is very timely given the outcome of the smallpox investigation in the final section of the book.

My favorite character was Mrs. Moresby. She appeared in book one, if memory serves, and here in “The Runaway Bride” her progressive and eccentric personality truly shines forth. She is delightful in every scene in which she appears, with a pragmatic approach to obstacles and no fear of defying convention in a society that places importance on one’s outward bearing: “Somewhere in Scripture, it says, ‘Man looks on the outward appearance, but the Lord looks at the heart.’ I always figured if God thinks the condition of a person’s heart matters more, then I should too.” Without her guidance, Arabella’s future may have been very different. Between the godly wisdom and counsel of Mrs. Moresby and the aforementioned Mercy Wilkins, Arabella’s courage begins to blossom, and she comes to realize that “She might not be able to eradicate every prejudice around her, but she had to start somewhere to make a difference. And the best place for that was with herself… one by one she’d been cutting away the tangle of propriety so that with each thread she cut loose, she was slowly finding the freedom to be herself and not someone else’s version of who she ought to be.” This is what makes “The Runaway Bride” so memorable, because at one point or another everyone questions who they are and who they should be. The good news is that, just as Arabella eventually comes to realize, the Lord has the answers in His Word, the Bible, and He already loves us with an everlasting love, desiring that we invite Him into our hearts. Seek Him!

I received a complimentary copy of this book from the author and the publisher and was not required to post a positive review. All opinions are my own.
Historical fiction Historical Romance inspirational Christian Fiction