Over the Hills and Far Away: Book Review of Janalyn Voigt's "Hills of Nevermore" 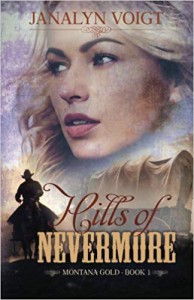 Opening with a wagon train journey, Janalyn Voigt’s “Hills of Nevermore” offers plenty of action along with romance and faith. I have always loved tales set in the nineteenth century, but I have not read many from the Western genre, a dearth that I am trying to remedy. The tropes that I have seen thus far are fairly universal, focusing on the well-known “Wild West” moniker and the telltale lawlessness of the western territories. This provides a prime opportunity for Christian fiction set during this time period. Indeed, as a Christian historical romance, this first book in the Montana Gold series follows a familiar formula while simultaneously infusing fresh elements.

In the vein of such authors as Miralee Ferrell and Janette Oke, Janalyn Voigt crafts a compelling novel that challenges not only her characters but also her readers. One issue “Hills of Nevermore” raises is the conflict between the settlers and the Indians (Native Americans). I would have enjoyed seeing this explored further, particularly after the opening scene, but I appreciated that it was brought up, and America’s experience with it. While the vulnerability of women is not a new topic, Voigt approaches it in a distinctive manner through America and Addie, two young widows now traveling together. Addie’s situation is interesting for 1863 because she does not want to forfeit her independence and wants to buy her own business accommodations with wages she has earned herself. The plight of women, particularly single women in the mining towns, speaks to the immorality and the Sodom and Gomorrah existence characteristic of so many of the early Western settlements. This sets the stage for the Gospel message, and this is the best part of Voigt’s novel.

“The greater the sin, the more love is needed to cover it, and God is love.” This beautiful Biblical truth encapsulates the message of “Hills of Nevermore”. Each of the characters struggles with letting go of the past and moving forward, striving to overcome traumas, loss, and shame. Especially through Shane, the circuit riding preacher, sharing one’s faith is a prominent theme. The difficulty of doing so in a very hostile environment seems insurmountable until the bishop tells Shane that “No one can do the Almighty’s work for Him. All God expects you to do is speak for Him when you should, bend your knees as often as possible, and move out of the way when necessary.” Such sage advice remains pertinent today, reminding us that only God Himself saves people; we are called to obey and plant the seed of God’s Word in people’s hearts.

A sweet yet action-filled story, I would recommend “Hills of Nevermore” to readers who enjoy Christian fiction, historical romance, and Westerns. There are discussion questions at the end for further study. I did have a few criticisms. The shifting viewpoint between several of the characters was disconcerting at times, particularly between America and Addie. Also, I valued the connection between the title and America’s Gramma and wish that it had been directly linked to heaven in America’s mind instead of inferred. As a character, America fell a bit flat for me. Did she truly grow spiritually throughout the novel? I had hoped for more in this regard and felt disappointed in her character overall. Nevertheless, I did enjoy this story and plan to read the sequel.