A Reluctant Bride by Jody Hedlund 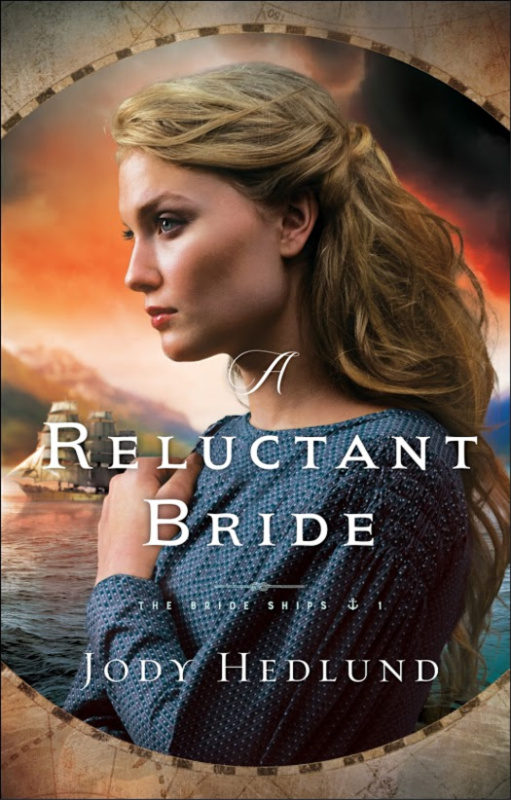 Living in London's poorest slum, Mercy Wilkins has little hope of a better life. When she's offered an opportunity to join a bride ship sailing to British Columbia, she agrees. After witnessing so much painful heartache and loss in the slums, the bride ship is her only prospect to escape a bleak future, not only for herself but, she hopes, someday for her sister.

Wealthy and titled Joseph Colville leaves home and takes to the sea in order to escape the pain of losing his family. As ship's surgeon, he's in charge of the passengers' welfare aboard the Tynemouth, including sixty brides-to-be. He has no immediate intention of settling down, but when Mercy becomes his assistant, the two must fight against a forbidden love.

With hundreds of single men congregating on the shore eager to claim a bride from the Tynemouth, will Mercy and Joseph lose their chance at true love, or will they be able to overcome the obstacles that threaten to keep them apart? Winner of the 2016 Christian Book Award and finalist for the Christy Awards, best-selling author Jody Hedlund writes inspirational historical romances for both youth and adults.

Jody lives in central Michigan with her husband, five busy children, and five spoiled cats. Although Jody prefers to experience daring and dangerous adventures through her characters rather than in real life, she’s learned that a calm existence is simply not meant to be (at least in this phase of her life!).

When she’s not penning another of her page-turning stories, she loves to spend her time reading, especially when it also involves consuming coffee and chocolate.

“Our whole lives are going to be filled with challenges, and our job is to keep growing and seeking after what God has next for us.” Jody Hedlund ranks among the top Christian fiction authors in my book, and “A Reluctant Bride” is the perfect illustration of why. Her writing impeccably integrates plot, history, characters, and setting to create a stunning journey that sweeps the reader into the story right from the first page and stays in mind long after the last. A seamless coalescing of elements breathes life into each chapter, both informing and resonating with the reader. Fans of such authors as Connilyn Cossette, Tessa Afshar, and Kate Breslin will not want to miss out on Jody Hedlund’s own repertoire, and “A Reluctant Bride” is an excellent starting point. 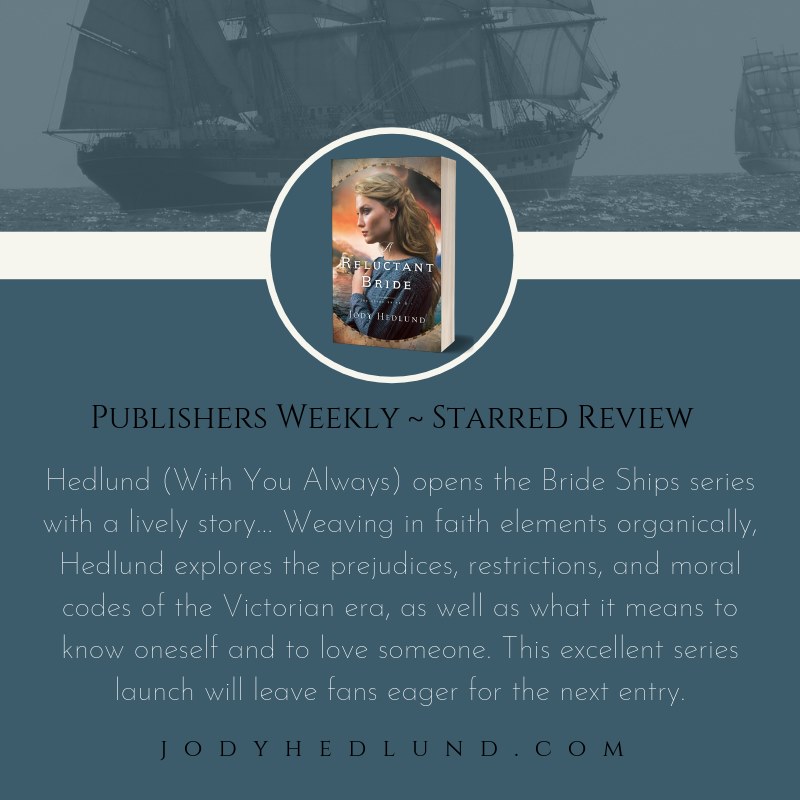 Based on a true story, “A Reluctant Bride” opens in London, England, in May of 1862. While she keeps the narrative clean, Hedlund does not shy away from the gritty details, which is so important not only in maintaining historical accuracy but also for the sake of appreciating the characters’ perspectives and drawing contemporary parallels. This is Dickens’ London, with its rampant disease and strife, its destitute population, and its permeating hopelessness. It is this milieu from which the aptly named Mercy Wilkins emerges, a tenderhearted young woman forced to make her way in the world apart from her family and the life that she has always known. Encountering Lord Joseph Colville, a physician running from the pain of his past, the two would seem to be polar opposites. However, circumstances draw them together and cause them both to examine their lives. One of the best aspects of this novel is the fact that the main characters’ faith is not deeply rooted to begin with but grows and matures throughout their journey as a result of their struggles. Moreover, all of the characters are three-dimensional and authentic, with plausible motivations. Two of the secondary characters, Miss Lawrence and Mrs. Moresby, particularly intrigued me. Given the time period, concerns regarding women’s propriety and social class disparities pervade the story. How Mercy responds reflects her subservient upbringing and serves as a call to action for readers today: “Don’t get stuck thinking you don’t matter or you’re not important enough. God didn’t create some people to be better than others. He created everyone to have equal value.” Infused with a strong faith component, “A Reluctant Bride” encompasses several prevalent themes. The romance is swoon-worthy yet clean, and it does not fall into the typical formulaic patterns of so many love stories but rather embodies a stirring complexity. The story encourages readers to challenge the status quo in a world where compassion and loving one’s neighbor goes against the grain. Helping the downtrodden and putting others before oneself reap eternal rewards and can change the world, one person at a time. As Joseph ponders, “Would not the world be a better place if a man simply lived in humility and loved his brother or sister as himself, regardless of one’s birth?” Most importantly, “A Reluctant Bride” emphasizes surrendering everything to God, a habit that requires continual practice and that brings true peace and contentment. For a thought-provoking, inspiring, soul-stirring read, look no further than Jody Hedlund’s “A Reluctant Bride.”

I received a complimentary copy of this book from the author and the publisher and was not required to post a positive review. All opinions are my own.